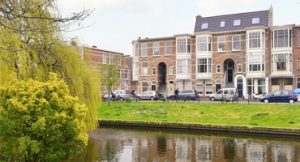 Since the end of 2017, Studio Flex has been involved in the development of a luxury apartment in an emerging Hague neighborhood. During 2018, a vacant, single-storey porch house that is in poor condition will be transformed into a unique two-storey apartment with all mod cons. Through this blog you can follow the different phases of this exciting development project. Starting with the selection of the house, until the final delivery and key transfer: Do you read along?

An update was last given in September on the development of the apartment on Valkenboskade. In the meantime we are a few months further and progress has been made in the process. The space has undergone various renovations and is another step closer to the overall end picture.

The contractors met on 7 May 2019 and discussed where it is allowed and what steps need to be taken to finish the apartment as practically and quickly as possible. During this discussion, we looked at the condition of the construction and the earlier agreements that were made. A clear vision of the duration has been discussed and dates have been confirmed.

In the meantime, the last plasterboards have been placed in the superstructure and these spaces are ready for stucco. At the end of May it is planned that the ground floor will be completely ready so that work can begin on plastering and painting the space in mid-June. If everything goes according to schedule, we are getting closer to the final phase.

After finishing the final details, the final phase of this project will start. There are already some architectural choices that must be made that influence the interior. To make the house completely ready for sale, interior and material choices are made that fit well into the modern classic interior style. It has been decided to install a wooden floor, which gives the house a warm, classic look.

In addition to the classic characteristic home properties that find their way into the interior, choices are also made that give it a modern twist. For example, a warm concrete look has already been chosen that you will see in the bathrooms and the toilet room. Two light concrete colors have been chosen that compensate each other well and form a sleek whole. The composition of classic and modern interior choices give the home a creative finish.