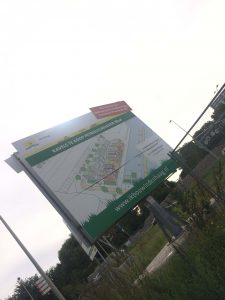 Since the summer of 2018 Studio Flex has been involved in the development of a brand new dwelling, located directly on the quay of the Petroleumhaven and part of the building project Laakhavens. On a plot with a construction area of approx. 57 m², a modern three- or four-storey house with a surface of almost 200 m² will soon be realized, including a front garden, private parking space, a spacious roof terrace and of course a magnificent view over the former harbor area, which is also redesigned. Through this blog you can follow the different phases of this challenging development trajectory closely. Starting from the first visit to the building site until the final completion: Are you curious? Stay tuned!

Since 2012, the municipality of The Hague has started selling lots to private individuals, entrepreneurs and small developers in the area Laakhaven West and Petroleumhaven, located in the district of Laak. Although the first design for the ports dates back to 1891, it was not until the beginning of 1900 that the first work was started. In several phases the Laakhaven were realized between 1901 and 1920, with the main purpose being the relief of the canals of The Hague, which could barely cope with the busy shipping traffic. In addition, the inland waterways in The Hague were often shallow, so cargo had to be transhipped to smaller barges, the so-called ferry service. As a result, the need for a new port area also grew. Only in 1928 it was decided to use part of the Laakhaven for the storage of petroleum, in order to keep this hazardous fuel out of the city center as much as possible: the Petroleumhaven.

Until the early sixties, the Laakhaven were used intensively, after which the area became less and less important due to competition from trucks and larger ships. In the years that followed, this part of The Hague started to deteriorate more and more, and the old port installations and warehouses remained mostly unused and hardly any maintenance was carried out. In the mid-1980s, however, the transformation of the Laakhaven area started. The central location, good accessibility and the presence of cultural and historical heritage provided inter alia points of departure for a thorough and successful innovation, in which the functions of living, working and education would be central. Meanwhile, several areas in this area have been thoroughly addressed and in addition to more than a thousand new homes, several striking buildings have also emerged, such as the Haagse Hogeschool, the MegaStores and the two large DUWO student towers. But many large companies have also settled here. For the time being, the Laakhaven West and Petroleumhaven areas form the last large-scale transformation areas of the Laakhavens umbrella project. The intention is to preserve the authentic, industrial character of this environment.

For the Petroleumhaven West, there are no less than 300 homes, including two residential towers, which will be built in the coming years. The first locations that went on sale are building plots for 10 company houses at the Waldorpstraat and 12 waterfront dwellings. These houses will have the front door on the car-free quay and may be up to 14 meters high, with a minimum of 3 and a maximum of 4 storeys. In the context of energy-neutral new buildings, the municipality of The Hague has formulated ambitious sustainability requirements in the fields of energy, environment, health, quality of use and future value, which future homes will have to meet.

After an exciting tender process, our client has acquired one of the 10 available lots for one of the waterfront dwellings. Meanwhile, all other lots have already been sold or are in option. So the land position has been officially acquired and the land is expected to be ready for construction in December of this year.
Studio Flex will take responsibility for the entire development process of this property, from the very first sketch design to the license applications, the tender phase and the final construction supervision. During the entire process we will unburden the client as much as possible, giving our architect and design team the opportunity to let their creativity run free. Of course there are some specific wishes that the design must meet, but we are very enthusiastic about the great amount of freedom and trust that the customer has given us.

Recently we visited the future building site for the first time, to view the current situation and the exact location with our own eyes. In this way, a good feeling for the atmosphere and environment can also be obtained. As you can see on the photos, we are currently working hard to get the land ready in time. Our first impression, however, is very positive, this place certainly has potential and the rugged, authentic environment offers sufficient starting points for an appropriate and unique design that is mainly contemporary, but will also be able to embody the original destination of the territory. Meanwhile, a first sketch design is being made.