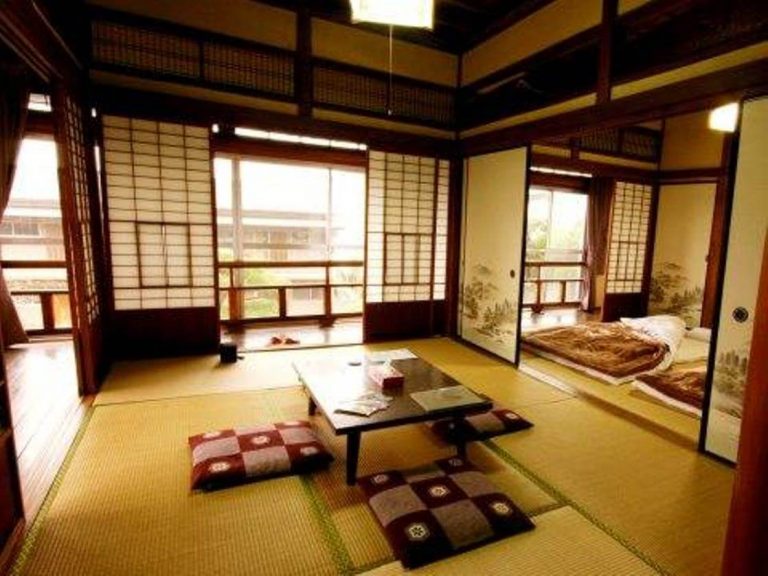 Unlike the West, traditional Japanese houses do not have fixed functions for most areas, apart from entrance, kitchen, bathroom and toilet. As a result, every room can in principle serve as a living room, dining room, study room or bedroom. In fact, a room can fulfill different functions at different times of the day. This is not only due to the fact that many rooms can be made larger or smaller by means of sliding panels such as fusuma and shōji, but also by the design of the furniture pieces. These are generally quite minimalist in design and are therefore easy and quick to store. Moreover, for centuries (and still!) Japanese living has been close to the ground, allowing traditional pieces of furniture to be much lower than their Western counterparts. 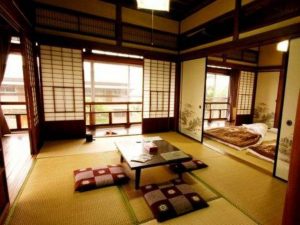 A chabudai is a low traditional Japanese table with an average height of 15 to a maximum of 30 cm. These tables were, and are, used for different purposes, such as dining table, desk or work table. The table top is usually square or round in shape and in terms of size they are mostly intended for a smaller group. During the colder seasons, the chabudai is often replaced by a kotatsu (炬燵), which is basically a chabudai provided with a heat source. Traditionally this was a pit in the floor, in which a charcoal fire was made. Nowadays, this is usually an electrical heat source that is attached to the underside of the table.

For sitting around the chabudai, a seat cushion, called zabuton (座布団), was traditionally used. People also often sat directly on the tatami floor, which consists of mats of rice straw. A zabuton is usually square in shape and is traditionally made of cotton and is only a few centimeters thick. For extra support of the back it can be used in combination with a chair without legs, called daisu (座椅子). A separate armrest, kyōsoku (脇息), can also be added. 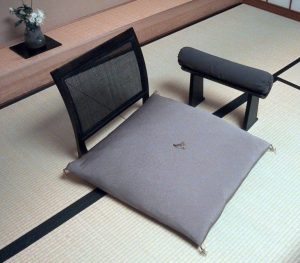 A futon is a traditional Japanese sleeping place, which in some respects could be compared to a western bed. It consists mainly of two parts, namely a type of mattress, shiki-buton (敷布団), which is placed directly on the floor and a quilt, called kake-buton (掛布団). The shiki-buton is usually placed directly on the tatami floor, which is softer than a stone or wooden floor, and consists of a cotton or silk cover with thick cotton filling. The length is about 1.80 x 1 m and it is usually about 10 cm thick. The biggest difference with a western mattress is the fact that the shiki-buton is easy to fold, allowing it to be aired well and stored away during the day. The kake-buton is rectangular in shape and consists of the same materials but is slightly thinner. The matching pillows are called makura (枕) and nowadays consist of soft materials. In the past, these were often hard and small, sometimes even only neck supports, to ensure, among other things, that hairstyles would not get confused. Compared to a western bed, a Japanese futon needs more care, since the mattress has to be aired manually because it is placed directly on the floor. To extend its life time, all parts of course always feature a cover. 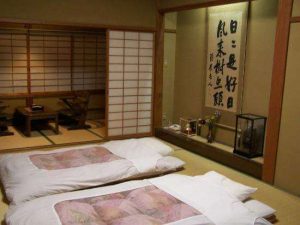 The term byōbu, literally ‘wind wall’, suggests that the first Japanese room screens were mainly used to protect a space from unwanted wind or drafts. Traditional Japanese houses had no heating and thin walls, so it must have been uncomfortably cold in certain seasons. As with many traditional Japanese things, these folding screens find their origin in China. From the 8th century onwards, Japan started producing screens themselves, which still had many similarities with the Chinese ones, especially with regard to decorative elements. Initially, the byōbu only consisted of one panel, but soon several panels were combined. Before the arrival of metal hinges, as a connection between the individual panels, silk cord or leather laces were used to flexibly connect them. It is customary for a folding screen to consist of an even number of panels, with 4, 6 or 8 panels being the most common variants. In addition, byōbu often come as a couple, whereby on the basis of the decoration a clear difference between left and right can be recognized. Over the years, the production of byōbu has grown into a true art form, in which partly valuable materials such as gold foil and expensive types of wood were integrated. The possession of an artistically decorated byōbu was seen as a true status symbol among the Japanese upperclass. 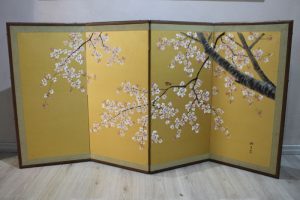 Even though these pieces of furniture are often more than 1000 years old, you can still find them in most Japanese households these days. On the one hand, this says something about the timelessness of the design, but in particular about the fact that these objects have also proven themselves in a practical way. Whereas many traditional Japanese elements have been replaced by Western counterparts during the 20th century, these pieces of furniture have fortunately retained their place in modern Japanese culture.