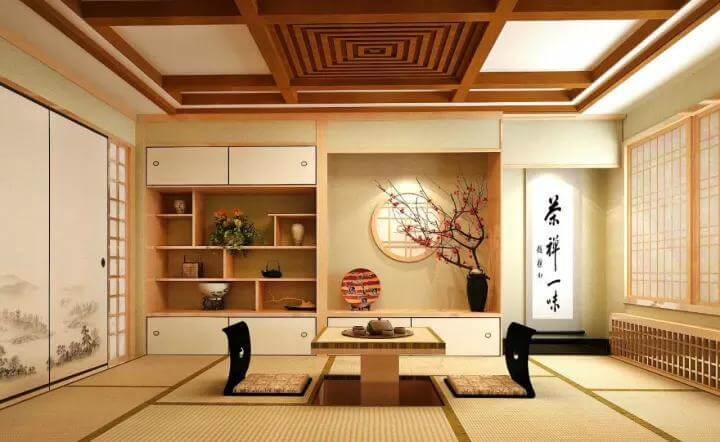 One of the most characteristic elements of a traditional Japanese space (washitsu / 和 室) is probably the floor. These consist of, for the most part, rectangular mats which are made out of a core of rice straw, which is covered on the outside by a braided layer of rush. On the sides, the mats are finished with a cotton band. These mats are called tatami (畳).

The term tatami is derived from the verb tatamu (畳 む), which can be translated as folding or stacking. On this basis it is thought that the first tatami were probably very thin and foldable. Originally, tatami were a luxury product for the nobility, which were used for the first time in the Heian period (794-1185) as seat cushions. During the Muromachi period (1336-1573), people started covering the entire floor with tatami. The tatami was also used by the higher class to sleep on. Normal houses had floors of tamped earth and normal people simply slept on the bare ground or on straw. From the 17th century, tatami became increasingly available to ordinary citizens as ground cover. 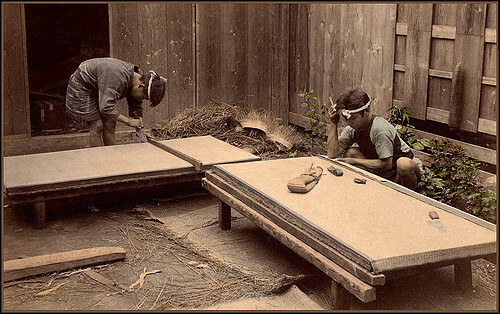 New mats are green in color and become yellow over the years through use and sunlight. This yellow color is generally more appreciated, because it shows the ‘life’ and history of the floor. Tatami absorb moisture when the humidity is high, for example in the rainy season. In winter, when the air is drier, moisture is released to the environment. In addition to this moisture-regulating effect, a tatami floor also provides extra sound absorption. Because the mats are made of natural materials, they can wear out during intensive use within a few years. A worn tatami is often first inverted and eventually replaced by a new one. 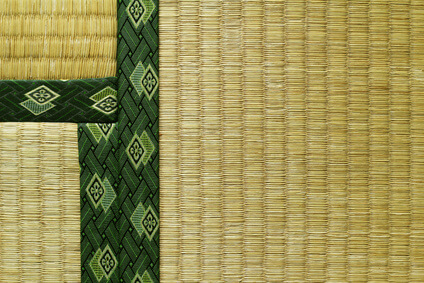 A tatami has a length of 1 ken (間), is 0.5 ken wide and has an average thickness of approx. 5.5 cm. One ken is a traditional Japanese measure of length, the actual length of which, however, differs per region and period in time. For the sake of convenience, however, it can be maintained that 1 ken is (on average) just under 2 m long. The ratio of a tatami is always 2:1, with the length always being twice the width.

Traditionally, the surface of Japanese rooms is often expressed in tatami (jō/畳). Common room sizes are for example 4,5, 6 or 8 jō. In addition, there are certain rules for the patterns in which the mats are to be laid. In this way, a distinction is made between so-called ‘favorable’ and ‘unfavorable’ ways. 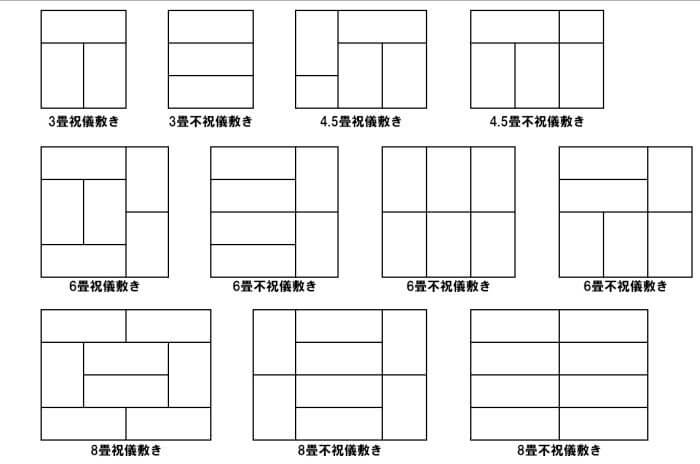 Today, most Japanese live in ordinary ‘western’ apartments. Old houses are being demolished and replaced by cheaper and more modern alternatives. The traditional Japanese houses mainly consist of wood, so that they last less and require a lot of maintenance. As a result of this development, many tatami floors have now been replaced by modern materials. Fortunately, some people still choose to integrate a special Japanese room into their home. These mostly feature a tatami floor as well, which preserves this unique Japanese heritage for future generations.