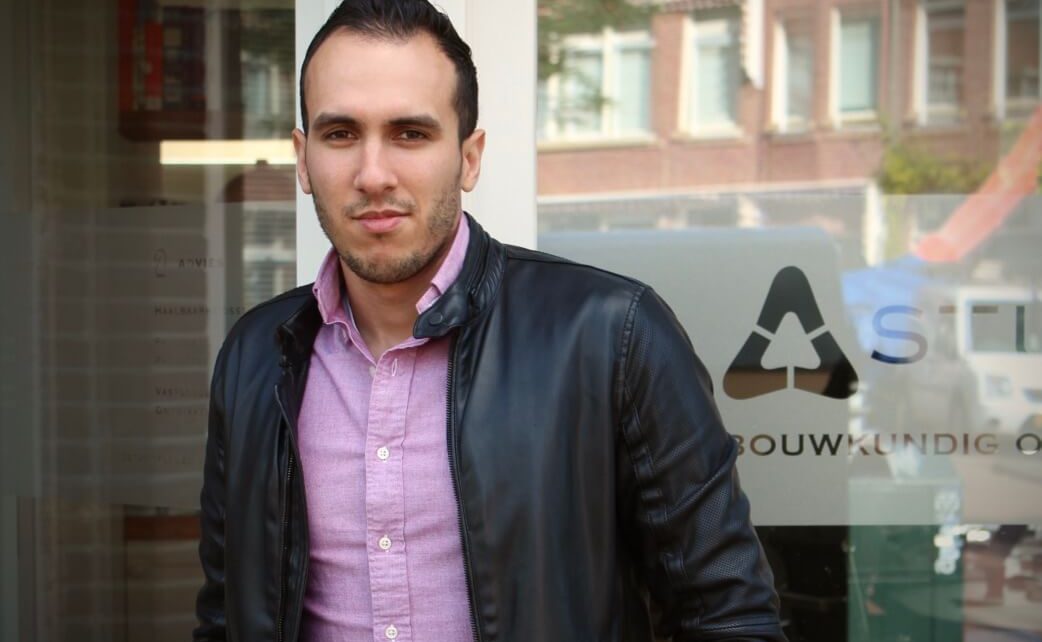 The office of Studio Flex is located on a cozy square in the center of Vogelwijk in The Hague. Where once a shoe factory used to be, now a young and enthusiastic company of ambitious professionals is established. A few years ago, the former shop was thoroughly renovated, including the cozy bay window that was seamlessly integrated into the original façade. That is also possible, because for an architectural design and consultancy firm your own office may be the most important business card. The fact that the team take their work seriously goes further than just the outside. Looking through the window we see a modern, light workspace with plastered walls and in the middle a large black worktable, as befits a real architectural firm. Along one wall there are some low filing cabinets with above them something similar to a huge acoustic panel. In the middle of it there is an illuminated version of the striking triangular company logo. There is a tight kitchen block on the opposite side of the room. Today we have an appointment with Rodrigo Lima, creative director and owner of Studio Flex. While we are still staring in a bit, a car stops right behind us. When we look around, the door of the snow-white BMW opens and Rodrigo steps out in a hurry. He takes off his sunglasses, locks the car and quickly comes to us, with a broad grin on his face.

Hi Rodrigo, hopefully we are not too early?

‘‘Bom dia! – You are not too early at all. It was a little busy on the road, so I am a few minutes later than planned. Hopefully you did not have to wait too long? “

After a short introduction, Rodrigo invites us to his office and we take a seat in the cozy seating area in front of the office. A little later we sit down with a cup of coffee in comfortable armchairs around a small coffee table.

Thank you for taking some time for us. Can you tell us more about Studio Flex, for example how and when you started it?

” Camille and I started Studio Flex in 2012, when there was still a crisis, with the idea that building projects could be realized in a better way than the common practice. There was little work for architects at that time, but we were able to find the first customers quite quickly. Of course it started with small assignments, but now we are also working on large projects. All this in a reasonably short time and we are still growing fast. ”

The front facade says that you are an architectural design and consultancy firm. What exactly does that mean?

That sounds very clear indeed, but also a bit boring. You said earlier that you wanted to do things better or differently than others. Do you also do other things?

” Of course, we work on all scales. Part of it is also interior design, actually the smallest scale, with our interior stylist Ramone playing a major role. We also design on that smallest scale, such as a door handle or a chair. Of course we also work on a larger scale. You can think of realizing large construction projects, but also, for example, real estate management. For example, we currently manage approximately 55 properties from different investors. The customer is completely unburdened and we arrange everything from any renovation to the placement of new tenants.

We want to bring different disciplines together under one roof. Actually we want to be able to offer everything ourselves. From making a design and the necessary construction calculations up to the tender and the final delivery and finishing. By being able to offer all this from Studio Flex we can put the wishes of the client during the entire project at the center and guarantee an optimal and often unique end result. ”

What exactly is your job as creative director?

” In addition to the acquisition of new projects, my job is to ensure that all processes run smoothly, especially internal processes. I therefore ensure that all personnel-related matters run smoothly, but also that projects run according to plan. I am also still designing a lot, because we are still a small office. I am therefore also actively involved in the concrete realization of projects, which I also really like. Often I am the head designer, or I lead the design team that is on a certain assignment. ” 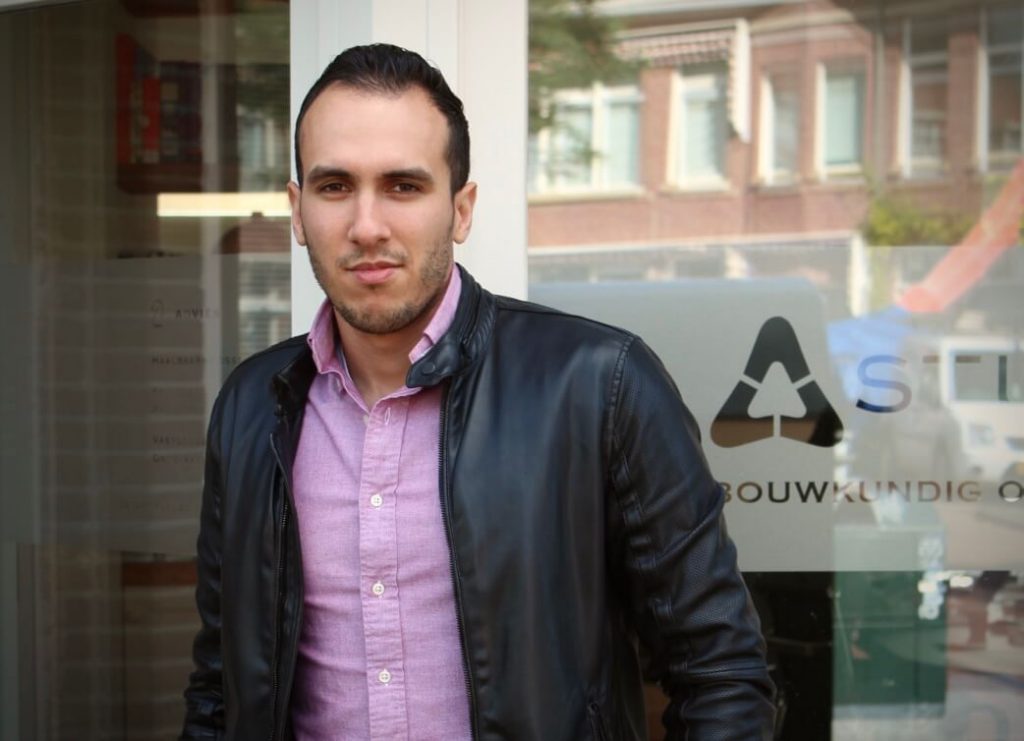 Can you tell us more about yourself?

” In the first place, of course, I have a passion for design. But besides architecture, I find it very nice to practice bonsai. (smile) In my free time I am also very busy with the bonsai art. I have about 10 trees at home with which I am currently working and of which I also design the shapes. In the case of bonsai you actually grow a miniature tree in a pot, which can be made to resemble a real tree in nature by pruning and manipulating. Here comes a lot of design, forward thinking and an eye for detail, qualities that I also use a lot during my work at Studio Flex. ”

” I was born in Brazil and moved to the Netherlands when I was 13 years old and have lived here ever since. Even though they have two different cultures, they also have a lot in common. The Netherlands is in some aspects a bit more conservative, in Brazil it is all a bit more free. In addition, not everyone has equal opportunities there and there is a big difference between rich and poor, for example there is many street violence or criminals who are involved in drugs or arms trade. To achieve something you have to work really hard, but also have the right connections. There are just a lot of young people who want to work, so you have to make sure you jump out. That I grew up in Brazil will undoubtedly have influenced me. At Studio Flex we have several employees with a different background and it is nice to see how you see that reflected in their character, everyone has their own qualities. ”

To come back to your work at Studio Flex, what do you think is the nicest thing about working here?

” The nicest thing is I think to be busy with people. In addition, I also find it very nice to occasionally ‘play’ the architect, so designing things and going deeper into certain details. It’s just amazing every time to see that something that you have designed on the drawing board is really being realized. ”

What are you currently working on?

” At the moment I am working on various projects. In fact, you are never just one ongoing assignment in this field. We are very busy and that is of course good for the business! (winks) A few renovations, a few constructive projects and as most recent two new homes at the Petroleumhaven, where we will take care of the whole development. ”

What do you hope to achieve with Studio Flex?

” We have had the ambition from the beginning to compete with the established order. This by starting from scratch and setting up a company ourself. We really want to join the rest of the influential companies and thus compete with big names like Arcadis and MVRDV and really bring change to the current market. We notice that there is a big shortage of companies that put people first and really want to try to improve the quality of life. That should really change. ”

Thank you for your time, nice to have spoken with you. Good luck in any case with all current projects and of course in the future!

After the conversation, we can watch on Rodrigo’s shoulder for a moment, to see with his own eyes how the work of an architect really works. On the computer screen he shows us some examples of different design phases and we could also try out how such a design program really works. We will not get much further than a rectangular box with some holes (windows)… A little later we say goodbye and Rodrigo returns quickly to his desk. 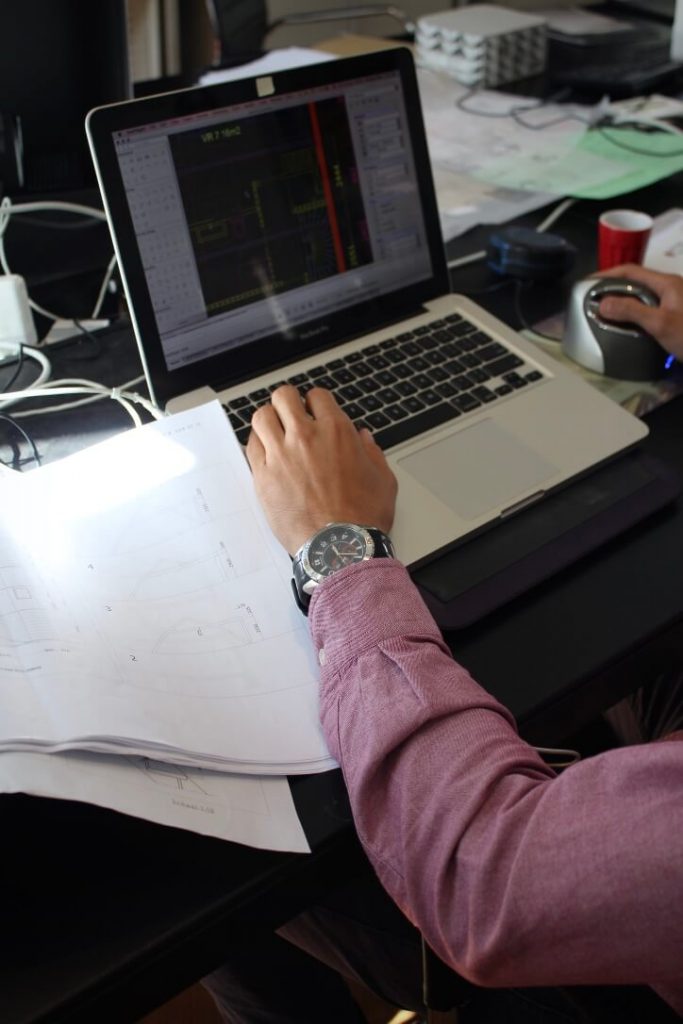 This man clearly knows what he wants and is prepared to fight hard for it. His Brazilian fighting spirit and design talent will certainly come in handy. We have every confidence, however, that he and his team will go far and perhaps Studio Flex will be among the well-known big names in the near future.

Next time we meet one of the other Flexers.