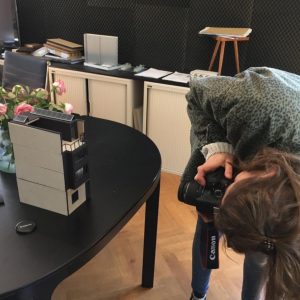 Why is it important to make a model?

Models are actually everywhere, and not just for building purposes. Building or making models can be regarded as specialist work, because models must be accurately built to scale. Patience and precision are important characteristics of a model builder. Building a model generally takes a lot of time and will not be suitable for everyone. Nowadays the model builder profession is changing more and more, because a model builder can also work with computer software with which models can be worked out on the computer. The traditional model construction involves activities other than the development of models on the computer.

Model builders are especially important for people, companies and governments who are involved in construction work. Think of architects, planners, urban designers, landscape architects and project developers. The function of models is generally to make certain designs visually transparent, so that people get a good impression of the plans. An example is a councilor, who can use a scale model to better assess how certain building plans look visually. Another example can be the making of a model with regard to river landscapes. If the plans are large, it is not unusual for a scale model to be displayed within a town hall, so that the residents of the municipality concerned can view the plans on the town hall through the scale model.

We, Studio Flex, also do scale model construction. We have made two models of our self-designed self-build plots that will be located at Petroleum harbor in The Hague. We do this to give the client a good impression of the design. First of all, the drawings were scaled on the computer and then cut out by a laser cutter. This way you get straight pieces that you can easily glue together. The materials that we have used for this model are cardboard and plexiglass, in which we have used different thicknesses and colors. We have made the model top scale 1:50 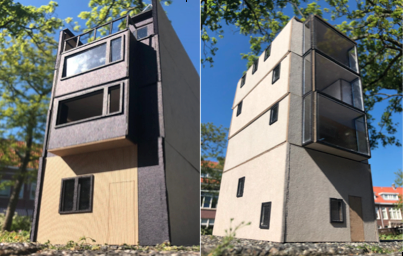 Interview about the process of making the models

1 What were your expectations when you started this project?

We thought it was a great opportunity to delve into both computer drawing and manual work. Our expectations were different from reality, it turned out to be more work than we had in mind. So we had underestimated the total project.

2 How long did you expect to be on this project?

The project is divided into two phases, namely computer drawing and building the model. The computer drawing took longer than we had in mind. This is because a few adjustments had to be made due to incorrect calculations. In combination with the development of the model, the duration of the total project was longer than we had in mind. We finally spent 11 full working days on it, we actually needed that time to put the finishing touches.

3 In what way did you go to work?
we went to work by first calculating and sketching all the walls in Sketchup. We then converted the file into Auto cad files so that they could be sent to the laser cutter. After collecting the materials, we started organizing the right pieces. We then started to attach the individual pieces to form a model.

4 What setbacks have you encountered?

The first setback that came our way was calculating the correct scale. After we had not calculated the scale correctly, we did not take proper account of the thickness of the cardboard. This resulted in small height and width differences during construction that had a negative effect. We also discovered during the construction of lot 7 that the windows did not fit in the walls, this was probably caused by a drawing error.

5 At what point did the model build surprise you?

We love the fact that there are new techniques to make a model, think of the laser cutting that we used to make our models. When using a laser cutter, the pieces are cut to the right rather than if you did that by hand, which makes for a cleaner model. While confirming the pieces we had to think about different methods. This was a fun creative process which led to a different way of looking.

6 How did your collaboration go?

The tasks were well distributed during the development, which led to a practical working method. We complemented each other well during the course of the entire project. The tasks were divided depending on the knowledge that each had. Since Isa and Laura had done the computer drawing work, she organized the pieces together while Aimee was able to continue with other tasks.

Due to the mistakes we made we discovered several things that we could have done differently. We should have put the drawing in Sketchup directly into a model to check whether the measurements were correct. In this way no cut-out had gone wrong and the assembly of the model itself would have been a lot easier.

8 Have you learned from the mistakes made and, if so, how are you going to include this in the future?
During the implementation, we have already corrected some errors, which was a good learning process for us. The setbacks that arose were obviously not fun, but we did learn from them so that we can prevent this in the future.

9 What did you like the most about the model?

The best thing about the model was that we all put it together. Because then you see the most results of all the work you have done.

10 What do you think is the use of making a model?
In the design process a model can come in handy to create a better picture of what the space can actually look like. During this process, design errors can also be removed and points for improvement made. In addition, a scale model can help to clearly display an impression of the future space.

11 How do you think someone who has more experience with making a model had tackled this?

An expert had looked more critically at the design from the start and the beginners could have prevented errors from his previous experiences. The expert could probably also have made mistakes, but could have come up with more creative solutions to solve them.

12 What did you expect as the end result?

we entered this process neutrally because we have learned from previous experiences that expectations can also disappoint you.

13 How do you find the end result?

We are happy with the end result because we went into it without expectations. It was not too bad for us, there were of course some points for improvement, but the model gives you a good insight into the overall design. We think the models look very good and give a good realistic image.

14 What added value does the model have compared to a 3D model?

By being able to hold a 3D model you get more insight and guidance. The choice to make a model gives added value to the project because you can better estimate how it will become reality.

15 At what time do you think it is best to build a model?

There are several times when a model can be useful. You can make a model for yourself, this is usually used to support the design process. Or more towards the end of the design process so that you can exhibit it to customers, for example.